The Waiting: The True Story of a Lost Child, a Lifetime of Longing, and a Miracle for a Mother who Never Gave Up

I thought I’d share my thoughts on the book, The Waiting, that was published in 2014 because it’s a great example of how a family member can share a grandmother’s story. Professionally written and published by Tyndale House Publishers, the granddaughter, Cathy LaGrow, was co-authored by Cindy Coloma. 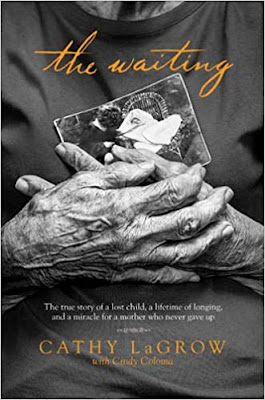 LaGrow tells in the back pages of the book how she researched and interviewed people. She lived in a different state than her grandmother and exchanged dozens of pages of Q&As and spent hours on audio interviews with her. She fact-checked her grandmother’s answers and found that her grandmother had an amazing memory for details.

The book begins with the story of her grandmother, Minka, as a child in South Dakota in 1928. At age sixteen, a very naive Minka was raped in the woods and became pregnant. (This part of the story was handled with great care, by the way.) Giving away her baby, the bulk of the book is about Minka’s yearning for her lost child and how she eventually raised a family, but never forgot her first daughter. Because Minka lives into her 90s, the story follows the Great Depression, WWII, and then the rapidly growing and changing America. The drama of true life carries the story forward and is always interesting.

For the book to read more as a story, LaGrow says she re-created conversations by making sure the characters conveyed only things that were factual and she kept the dialogue true to the personalities and views of the people conversing. “Wherever we attributed feelings, thoughts, or words to a person long deceased . . . we did so after carefully reviewing their letters and talking to Grandma,” LaGrow writes. Minka and family members read all the chapters for accuracy before publication.

Sometimes our family members’ life stories are worth writing about because they are dramatic, unbelievable, heartwarming, and many other powerful narrative considerations, but that could also mean that some family members wish to keep them private. LaGrow was careful to get everyone’s permission before sharing their part of the story. She not only made sure they were comfortable with what was said, but also that all details were accurate.
Posted by Ora Smith at 9:57 AM