How comfortable are you writing historical fiction about your ancestors? 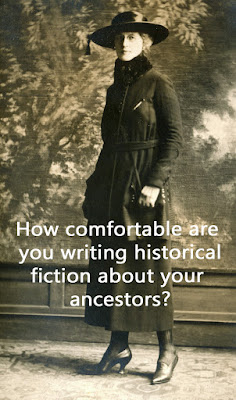 Me, not so comfortable at first. I didn’t want to “get it wrong.” And I especially didn’t want to insult them in some way because I do believe I’ll see them again in the hereafter. And let’s face it, they didn’t always do things right, or live a shining life of admirable virtues. And of course, I wouldn’t have a story if they did! It’s the bad guys, or flawed people that make stories interesting.

There are a few ways to talk “trash” on your ancestors without feeling a boatload of guilt.

I wrote a book last year that would be called mixed genre. My chapters flip-flopped on whether they were my nonfiction experiences regarding the search for the ancestor and how I felt about what I was finding, and then the other chapters were the narrative of the ancestor’s life—her life in story form, where I wrote historical fiction. It’s the only way I could do it with this particular story because I was out to prove a mystery and find the truth, yet I couldn’t find enough “good” story plot lines that were proven. (I wish I could say more about that book, but until the story is published, mum's the word.)

This week I picked up a historical fiction book by Susanna Kearsley, The Winter Sea (2008), that surprisingly followed the same structure as I had written my book, although the present-day chapters—the woman who was writing about her ancestor—were also fiction, written as if they were nonfiction. Let me explain: The storyline of past events was historical fiction about the exiled James Stewart trying to come back to Scotland in 1708 to reclaim his crown, and a young woman (the present-day writer’s ancestor) who witnessed the events. The modern story that ran throughout the book was about the author’s experiences of writing a story about her ancestor who she seemed to be channeling for information. The fictional author finds out her novel is more fact than fiction.

I wish I could say I channeled my ancestor. I certainly tried! And I do know my book is more fact than fiction.

Structurally, both The Winter Sea, and my book are written in chapter form using chapter numbers for the present-day story, and the Roman numeral system for the historical fiction story. There are lead-ins or transitions at the end of each chapter that take you to the beginning of the story of the following chapter, whether its present-day or past.

Don’t be surprised if your readers like the historical fiction part the best. People generally remember story better when it’s written in narrative. The structure described above is only if the story absolutely calls for it.

If you’re writing completely historical fiction and present-day doesn’t play a part in your story, then be sure to follow the same guidelines for classic structure of a traditional novel.

Then again, you could always write yourself into the story as a fictional character searching for her past and unlocking family secrets as Kate Morton did in The Forgotten Garden (2008).

And if you get the facts wrong about your ancestor, you can apologize when you see them in heaven.
Posted by Ora Smith at 12:33 PM No comments:

Email ThisBlogThis!Share to TwitterShare to FacebookShare to Pinterest
Labels: Ancestors in Fiction, ancestors in nonfiction, based on a true story, historical fiction, writing about ancestors, writing craft

Get to Know Your Ancestors Better Through DNA Autosomal Testing


Last week, AncestryDNA reported they have surpassed 4 million customers in their DNA database. They are the largest consumer genetic testing company.

AncestryDNA started in 2012. With a kit they send in the mail, one provides a saliva sample and then sends it back to them. The results were typically taking less than 6 weeks, but since the new year, they’ve experienced such a large number of test kit returns that the results are taking much longer. My husband sent his in right after Christmas and didn’t received the results until March 15.

Here is what AncestryDNA reports:

You can go onto their website and hear some of the stories customers experienced.

Once your results are in, you’ll receive an email that will take you step by step on how to view the information. There is a short video you can watch to help you understand your results.

The “cousin matches” information that AncestryDNA provides should be investigated and confirmed using additional research because it relies partially on the family history work of others, which isn’t always accurate. In other words, if I am a match to someone who has a family tree on Ancestry.com, I can view their tree on the website (if I am a paying subscription member). It is possible there is bad or incomplete information on that tree. But, the results do take me toward individuals with whom I can collaborate with on our shared family history, and hopefully work through research together. 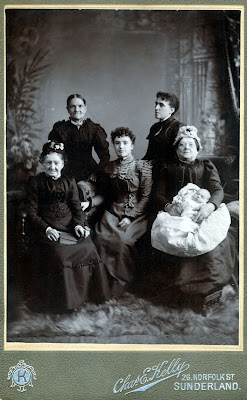 For instance, I have been able to share old photos of ancestors with those who matched as 4th cousins—photos they had never seen before. And although there may be cons to DNA results on Ancestry.com’s family trees, it does not change the fact that your ethnicity results are a match to others of the same ethnicity.

The three main companies that do autosomal testing are AncestryDNA, Family Tree DNA, and 23andMe. Which is best for you depends on your goals and family history, but AncestryDNA does have the largest database. It is larger than the other two combined.

You can use the results you get from AncestryDNA and post them on other family tree DNA websites to find more matches.

I have a friend of Eastern European Jewish lineage who reports that she had only 4th cousin matches on AncestryDNA, and those who she messaged couldn’t tell her their 2nd and 3rd generations so they didn’t know how they made that 4th generation match. She must consider the matches as clues at this point.

AncestryDNA has only recently entered the international market, and of course growth is expected. At the moment, Family Tree DNA or 23andMe may be more beneficial for those with heritage outside the United States.

From the first time my autosomal results were posted on AncestryDNA, updates have been made by the company and many more cousins found. It is worth checking back periodically to see what new has been discovered.
Posted by Ora Smith at 3:59 PM 1 comment: